Interview with Morbosidad done by Patrick posted on 2-16-18 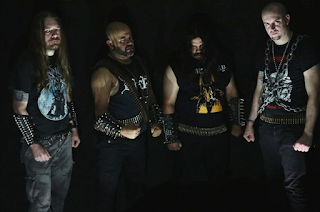 Interview with Morbosidad done by Patrick

1.Hails how are things going in Texas these days?Please introduce yourself to the readers?

**Hails brother, things are good so far. This is Tomas Stench vocalist of Morbosidad.

2.I know you have been a part of the underground scene for many years were you ever into tape trading in the late 80's,early 90's? What were some of the early metal gems that you got?

**Fuck yeah!! back in the old days, is was the only way to find about bands. We did not have internet, metal archives like the this new generation have. They have it so easy nowdays. Miss those days brother, Im still doing some tape trading if I have the time. Way to many to mention, some gems I was able to get from those days were like Black Crucifixion, Xysma,Devastation (Texas), Pactum, Tenebrarum, Repugnance, Infierno (Argentina), Epidemic, Immanis,Feacal Tripe,Exhumed, Murder Rape, Mortuary (France), Godless (Puerto Rico), Hadez, Sorath (USA) plus many more.

3.Besides tape trading were you a big reader of fanzines back in the day? What were some of your favorite zines to read and what do you feel made a good fanzine?

**I was actually, dont remember some of their names though but I really liked reading mostly the ones from South Americaand Central. Xerox copies, copy and paste, true feeling nothing fancy, bunch of UG band flyers, the perfect old school way, you dont see that often anymore nowadays.

4.I believe Morbosidad was formed in the mid 90's what gave you the idea to start this band?And what is the current line up of the band?

**I actually found a zine a while ago back at home in California, I was going through some boxes of old mail and found a Morboso interview from Blasphemous Zine from Costa Rica from 1991. I always though we were formed in 1993 haa, funny story though, something I wanted to share.
One reason I wanted to form the band was to be able to express myself through music, sometimes listening to bands was not enough, I wanted to do something more then just being a fan. Spread the hate and listen and support to the UG at the same time.
Current line up now is me (Tomas Stench) on vocals, Joe Necro on guitar,
Ded Ted on bass and Matt Mayhem on drums.

5.For the readers who have never heard Morbosidad's music how would you best describe it and who would you are are some of the bands biggest influences?

6.Corona De Epidemia is Morbosidad's fifth full length release how long did it take the band to write the music for the new release?

**This new album took more time the we except it.
it was recorded on two sessions. Side A supposed to be for a split with Necrosic but it never happen. Then side B was recorded two years later due to our bus schedules with work, me being away from home etc but I think if we are 100% dedicated and focus to write a new album, it should not take us more then 5 months to have it done. 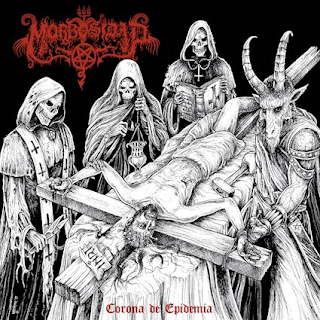 7.What have been some of Morbosidad most memorable shows over the years? And who were some bands you had the opportunity to share the stage with?

**To many to mention, but one of our faves will be Black Flames of Blasphemy, NWN Fest, Brazilian Ritual, the one we did in Guatemala a few years ago and of course the ones we always do on small venues, those always get rawdy and crazy. We had been lucky to shared stage with Autopsy, Blasphemy, Archgoat, Sadistic Intent, Nifelhiem, Incantation, etc.

8.Are their any tours or shows coming up in support of the new release? If yes where will the band be playing?

**Yes, actually Im answering this interview one day before heading to the East Coast to play a few shows in Marylan, NY and Boston. Next month (March) we are playing a fest with
Pestilence, Morbid Macabre etc in Guatemala and El Salvador. In May a local show in San Antonio, then in April we are playing a fest in Tenessee with Dysma,Abysmal Lord etc. In June we are playing Destroying Texas with Zemial, Sabbat,Ungod etc. We are going back to Chicago in July to play a fest with Blaspherian, Manticore, etc Then in October we might do 2 shows in South America and November Im working on 2 dates in Los Angeles and Oakland, pretty busy this last years of Morboso Metal.

9.Besides playing in Morbosidad do you or any of the members currently work with any other bands or solo projects?

**Matt my drummer plays in Blaspherian and Oath of Cruelty. Joe same thing, Blaspherian. Ded Ted he plays in a band called Hell Razor. Im working on project called Mercenario,with Jeff from (Bloodsoaked/ Mex) and Bestial Saviour. Our plan is to record a demo tape first then and ep later an hopefully a full lenght if things go smooth.

**Morbosidad was formed in California, I happen to be living here in Texas for the moment. Texas scene is good, total support to bands, lots of new good bands, plus the old ones of course. The fans are crazy as fuck! one of the best shows we have done was here in San Antonio, fans got rawdy and crazy as always, they never disappoint.

11.Who are your all-time favorite bands coming out of the Texas scene? And are their any new bands you could recomend to the readers to check out soon?

**My fave one is Devastation, I know you got Necrocore, Dead Horse, DRI, Rigor Mortis, SA Slayer, Ripping Corpse, Gammacide etc but to my Devastation was killer when I first heard their first tiltle, then signs and of course Idolatry. I like HOD, Funeral Bastipsm,Oath of Cruelty just to name a few.

12.When you need to take a break from writing music or band business what do you like to do in your free time?

**I'm always busy with the band and my job but on my free time I like to watch movies and sports, that's about it nothing fancy or out of ordanary.

13.Thank you for taking the time to fill this interview out do you have any final comments for the readers?

Thanks for the interview, the space and support. Support the real UG!!

at February 16, 2018 No comments:
Email ThisBlogThis!Share to TwitterShare to FacebookShare to Pinterest
Labels: Interview with Morbosidad done by Patrick posted on 2-16-18

Interview with Goatkraft done by Patrick posted on 2-16-18

Interview  with  Goatkraft  done  by  Patrick

1.Hails please  introduce  yourself  to  the readers?
We are GOATKRAFT from Norway. We are Bestial Black Metal horde. So far Iron Bonehead Productions have released GOATKRAFT’S  “War Metal – Promo 2017” and in march They will release “Angel Slaughter” mini album.
2.When  did you  first  start listening to  black metal  and who  were the first bands you  listened to?
Beginning of 90’s. Bathory “The Return” and Beherit ”The Oath of the Black Blood” were the my first BM tapes.

3.You all formed Goatkraft  in 2017  what gave you the  idea to  start this band? And  who  would you  say  are  Goatkraft's  biggest  influences?
We had a plan to start this band long time a go,  but there was always something else more important. Blasphemy, Beherit, Black Witchery, Bestial Warlust, Conqueror... had the biggest influence on Goatkraft music I think. 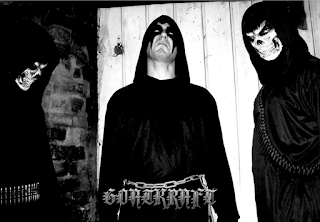 4.Angel  Slaughter  is the  bands debut Mlp  which  is  being released through the mighty  Iron Bonehead Rec. how did you  and the come in contact  with this label?
We have send emails with request and link to our bandcamp to five labels and got possitive respond from three of them. One of them was Iron Bonehead, and since nowadays it’s one of the best labels in Europe, if not the best,  we decided that this will be the best option for us.
5.Does the  whole band work on  the  music or does  one member  usually  write  everything?
I am ( G. ) responsible for all the music and lyrics. 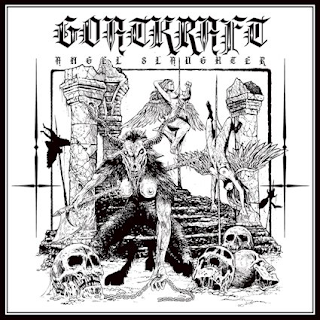 6.Goatkraft even did a  cover of  Black  Witchery's  Unholy Vengeance Of War  why  did you  decide to  do a cover of this  song? Are their  plans to  do  more covers  on future  recordings?
We did Black Witchery cause their music had a huge impact on me.  Specially “Hellstorm of Evil Vengeance” split, when it was released. We also did other Black Witchery song - “Darkness Attack”.  Apart from BW covers, our interpretations of  Blasphemy’s  “Ritual” , “Demoniac” and Bestial Warlust’s  “Left for Voltures”  were also recorded.  There will be more.  Maybe one day we will release album with covers only.  We are on the beginning of the path...

7.Besides  the upcoming  Angel  Slaughter release  does the band  have  any other  merchandise  coming out  soon in support of the  debut?
“War Metal – Promo 2017” tape is still available.  There will be maybe some t shirts.

9.Besides  working in  Goatkraft  do you  or  any of the  members  play in  any other  bands or  solo  projects?If  yes please tell the  readers  a  little about them?
Other projects are not  so important at the moment. We concentrate ourselves now only on Goatkraft. We have just finished recordings of Goatkraft’s debut  album but it is too early to talk about it. This is the most important band for us right now.

This topic is complex and has many aspects. We would have to discus all of them to get the whole picture.  Basicly, It has changed, evolued. Divided self to a smaller genres. It is certainly not as the same as it was. Back in the 90’s it was the best and strongest scene in the whole world. Most of  Black Metal bands from the other countries were looking up on a Norwegian bands. Later on, when “Big Boom” have passed, it wasn’t going so well, but hordes like 1349, Urgehal, Tsjuder or Aura Noir, just to mention few, were still keeping very high level. Nowadays there are others like Tortorum or Dødsverk, among the others. They   are fantastic bands so I guess it is not that bad.  Of course  if  we would focus on the whole scene, there are also other things, but they are not related to Goatkraft in any way, so there is no point to talk about them.

11.Who  are some of your  all-time  favorite  Norweigan bands  and are their  any  new  bands you  feel the readers  should  watch out  for?

Mayhem will be my favorite, I guess. For everything that this band brought into Norwegian Black Metal. Apart from albums which were not as good as “De Mysteriis...”,  this is the best Norwegian Black Metal band in my opinion. Like I said I don’t have so much time to follow every new band, like I did in the past , but surely bands like Dark Sonority, Cobolt 60, Daudur or Dødsverk that I have mentioned earlier are very good.

12.Thank you  for  taking  the  time  to  fill this  interview  out  do you  have  any  final  words  for the  readers?
Support GOATKRAFT buying ”Angel Slaughter” mini album which will be released by Iron Bonehead Productions 09.03.2018 on Cd and LP formats. Death and destruction.

at February 16, 2018 No comments:
Email ThisBlogThis!Share to TwitterShare to FacebookShare to Pinterest
Labels: Interview with Goatkraft done by Patrick posted on 2-16-18
Newer Posts Older Posts Home
Subscribe to: Posts (Atom)