1.Hails please introduce yourself to the readers?
We are Valle Crucis, black metal from South Carolina, USA. Our members include myself (Skullcrusher) on guitar/vocals and Ashriel on drums. We formed in April of 2016 and currently have two releases, a self-titled EP and a newly released full length album entitled “Iron & Blood”.


2.When did you first start listening to black metal and who were the first bands you discovered?Who would you say are some of your current favorite bands?
My introduction to Black Metal was the original Stormblast record from Dimmu Borgir my senior year of high school. I really didn’t try to get more into it until a few years later when I started listening to Immortal and Satyricon. It took a bit to immerse myself in it because of my religious upbringing and this was during a time when I was breaking away from that. Some of my favorites now include Sargeist, Behexen, Hell Militia, Ondskapt, & Marduk.


3.When did you first meet the other member of the band?And was it long before you two decided to start Valle Crucis?How did you choose Valle Crucis as the name of the band does it have a special meaning?
I believe we met in 2014. During a extreme metal show here in South Carolina. We didn’t form the band until a couple years later after we both departed from previous bands. The name of the band comes from a legend of a hellhound haunting a church yard in a town in North Carolina. I wanted to incorporate some local (somewhat local) lore into the band.


4.I believe the band is two man band would you like add more members to make a full line-up or do you prefer to work as a two man band?
Negative. There are no plans to add another member. Working with people is draining and slightly annoying, so the less people we have involved, the easier it is to get things done and schedule shows, practice time, etc.


5.Who would you say are the bands biggest influences?And for the readers who have never heard Valle Crucis's music how would you best describe it?
Our influences come from bands like Sargeist, Behexen, Dark Funeral, Marduk, Satyricon & Merrimack. We’ve been described as a mix of Marduk & Mork Gryning,. Very dark, aggressive yet melodic passages.


6.Iron&Blood is the bands debut release how long did it take the band to write the music for the debut?Do you both work on writing the music or does one member usually write everything?
The music was written over the course of a year after our self-titled EP release.


7.Who usually takes care of writing the lyrics for the music?What are some topics you all wrote about on the debut release?
Myself. I’ve written about depression, hatred of religion, hate of the status quo in the United States of politics and society, anger towards several things, sex. There’s a wide array of topics that I’ll write about.


8.What does black metal mean to you two?
Black Metal to us is unapologetic, freedom, it is a vessel for expression. Not much more to say in that respect.


9.Valle Crucis comes out of the U.S black metal scene what is your opinion of the black metal scene in the U.S.A?
Lacking. And this is outside of the more well-known acts. It’s usually one a few things. Bands are trying “too hard” to be kvlt or true black metal and not being true to themselves. Second, there are the ones that have good sounding music, but the presence and attitude is missing. Third, some are just sellouts trying to be as popular as they can be, begging to get on shows or for people to hear their music. Not to say all the bands are like this, but a fair number seem to be.


10.Who are your all-time favorite bands coming out of the U.S black metal scene?Are their any new bands you feel the readers should check out soon?
Some of the ones I would say are top favorites are Burial Oath, Atrum Inritus, Judas Iscariot, Kult ov Azazel and Obsequiae. Some newer ones I’ve been keeping up with (and people may or may not already know them) are Imperialist, Von Nacht and Helleborus.


11.Besides working in Valle Crucis do either of the members currently play in any other bands or solo projects?
Neither of us are currently involved in any other full band projects. I, however, am working some solo Funeral Doom material that will likely be released early next year.


12.Thank you for taking the time to fill this interview out do you have any final comments for the readers?
We thank the readers for taking time to read the interview and hope that they enjoy what they hear from us.

at December 18, 2018 No comments:
Email ThisBlogThis!Share to TwitterShare to FacebookShare to Pinterest
Labels: Interview with Valle Crucis done by Patrick posted on 12-18-18

Interview with Blackult done by Patrick


2.When did you first start listening to black metal music and who were the first bands you discovered?Who are some of your current favorite bands?
Nebulah: I first started listening to metal when I was 16 years old and I started following black metal the first time I discovered Dimmu Borgir, 1349, Emperor, Marduk, Immortal. Then I fell into the underground and learned more about Black Metal and started listening to Bathory, Darkthrone, Burzum, Mayhem, etc... but right now i like Judas Iscariot, Kampfar, Satanic Warmarster, Nargaroth, Arckanum… and our compatriots Narbeleth and Ancestor.


3.When did you two first meet each other and was it long before you started Blackult? Who would you say are the bands biggest influences?
Nebulah: We knew each other from childhood and started listening to metal the same year (2006) and we created Blackult and attempted to create a thrash metal band in 2012. Our influences are from the true spirit of Black Metal and Ancestor debut album “Hell Fuckin´ Metal” (2008). We picked the Blackult name from the first track of that album. And Narbeleth was a major influence being it was best and most important cuban Black Metal band.

4.Our Kind is the bands debut release featuring the Black Metal Army demo and the Below Enchant Moon EP. when did you first come in contact with Crushing Notes Entertainment?
Nebulah: in 2016 I saw a post a of Crushing Notes Ent. on the internet, they wanted some Latin-American bands to sign on the label. I sent a demo from my personal project Hexed and they liked it but a demo not was enough. So I sent the Blackut albums and then we signed for a compilation album and “Our Kind” CD. This was very slow because in 2016 I was going through a lot of personals problems, but finally we released the album.

5.Have you all started writing new material for the next release? How long does it usually take to complete one song?
Nebulah: In 2019 we will start writing new material. We have some tracks but nothing set in stone. Writing black metal riffs for me is very easy and when I write a riff I send to Necromancer, because he lives in Spain, so the process is very slow because the internet in Cuba is very expensive.

6.Besides the “Our Kind” debut does the band have any other merchandise currently availible? If yes what is availible and where can the readers buy it?
Nebulah: Everything is available at www.crushingnotes.com. Only the album is on sale right now but the label will be releasing some t-shirts, stay alert!

7. I know Blackult is a two man band would you like to find more members to make a full line up to play some live shows or do you prefer working in the studio?
Nebulah: When we are in studio we have a full band and we intend to play live with a full band, but Necromancer lives in Spain, so for that reason Blackult doesn’t perform full time on the road. When Necromancer comes to Cuba, of course we will play and we try to find a drummer for Blackult live shows, but not a full time member.

8.If you had the opportunity to work with any musicians who would you like to work with?
Nebulah: With Lord Dakkar from Narbeleth in a split album that would be awesome!

9.What does black metal mean to you two?
Nebulah: My life, my path to walk in this world!

11. Thank you for taking the time to fill this interview out do you have any final comments for the readers?
Nebulah: Thanks for the interview and thanks to the black metal horde to find our music and support! This 2019 Blackult will be more active we stay in the shadows a lot of time! HAIL BLACK METAL! FOR THE GLORY OF THE FUCKIN´ UNDERGROUND!

at December 17, 2018 No comments:
Email ThisBlogThis!Share to TwitterShare to FacebookShare to Pinterest
Labels: Interview with Blackult done by Patrick posted up on 12-17-18 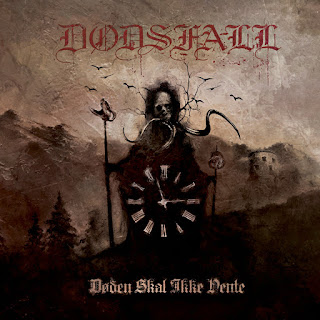 Dodsfall--Doden Skal Ikke Vente  cd,lp {Osmose Productions}
After a four year silence Norway's Dodsfall return with their fifth full length release.Doden Skal Ikke Vente is ten tracks of crazed and furious yet very well written and crafted black metal.The guitar work is done with alot of skill combing both crazed guitars and some slower,mid paced patterns. The guitarist does write some very creative and interesting guitar sections.The vocals are razor sharp black metal screams and screeches their are even some clean vocals used in some of the tracks.The drums are played with both hyperspeed blasting drum patterns and some more complex drums that go from a mid paced to a faster drum pace.This is my first encounter with the Norweigan black metal band Dodsfall but if you are a fan of well written and performed Norweigan black metal then do yourself a favor and pick up a copy of Doden Skal Ikke Vente when it is released in mid January. 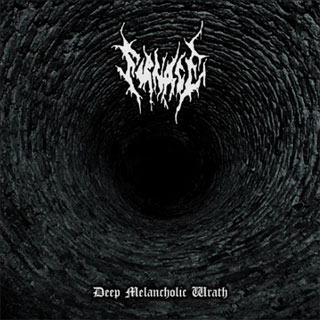 Fornace---Deep Melancholic Wrath  cd{Paragon Records}
Fornace comes out of the mighty Italian black metal scene with their third full length.Deep Melancholic Wrath features five tracks of raw intense black metal with a mix of both fast paced and some slower mid paced sections.The guitarist write some fast and crazed guitar parts but also writes some memorable guitar passages.The vocals are mainly grim,black metal shrieks and screams that really fits Fornace's musicial style.If you are familiar with Fornace's previous releases then you know what to expect so be sure to get a copy of Deep Melancholic Wrath.If you are a new listener and enjoy old school black metal with some modern influences then be sure to pick up a copy of the new release today.
Label  Contacts
https://www.paragonrecords.org/
https://www.facebook.com/paragonrecordsli/
at December 04, 2018 No comments:
Email ThisBlogThis!Share to TwitterShare to FacebookShare to Pinterest
Labels: Fornace---Deep Melancholic Wrath cd{Paragon Records} Posted on 12-4-18
Newer Posts Older Posts Home
Subscribe to: Posts (Atom)