Interview  with  Lycanthropy  done  by  Patrick

1.Hails! Please introduce yourself to the readers?How are things going with you this week?
Gunner: Hails, I am Gunner - a guitar player from black/death metal act Lycanthropy. So far this week goes pretty well. At the moment I’m listening new Satyricon’s album and it sounds a bit strange...

Oleg I.: Oleg hier, not much this week, working hard, sometimes hardly working.

2.When did you first discover black,death metal and who were some of the first bands you listened to?
Gunner:  around 2005, I was 16 or 17 years old. The first band I heard was Mayhem. Later I discovered Dark Funeral, Dissection, Lucifugum & Enthroned. Before black metal I was more into death metal kind of stuff, mainly Florida’s school.

Oleg I.: in 2000-2001, first heard metal mainstream as everyone else then found out about Emperor and everything changed since then.

3.A.V.R.E.I.L is Lycanthropy's six release which was released through Lower Silesian Stronghold Rec. how did you and the band come in contact with this label?

Gunner: Lower Salesian Stronghold released our previous EP “Operation Werwolf” back in late 2014, so we knew each other & it was naturally to continue cooperation with Krzysztof (the owner of the label). He offered good conditions and that was it. 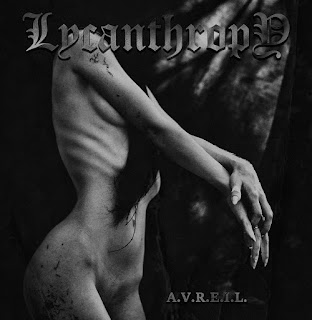 4.How long did it take the band to write the music for the new release?

Gunner: As for guitar it took one year, everything was ready in summer 2015. This album marks the longest gap between our albums. Our previous LP “Totenkranze” was released in 2013.

Oleg I.: as Gunner mentioned we had the material since 2015 but I wasn't in a place and time in life where I could record so we had to wait for me to settle in Ireland, then in January 2017 I finally went and recorded the drums on whatever equipment was there hah!

5.What are some topics you all wrote about on A.V.R.E.I.L?

6.Besides the new release does the band have any of the past releases still available?Beside the physical releases does the band have any other merchandise available if yes what is available and where can the readers buy it?
Gunner: Oh yes, our releases are available via band’s bandcamp page - https://lycanthropy.bandcamp.com/
As for merchandise, USA buyers can find shirts via Stahlhelm Records, in Europe shirts are still available via Sturmglanz Black Metal Manufaktur. Plus new shirts will be available in a week or two via Lower Silesian Stronghold. 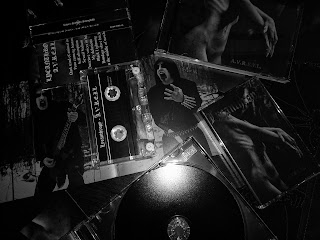 7.What have been some of Lycanthropy's most memorable shows over the years?

Gunner: The last one was extremely good, it took place in Orel (Russian town) in late 2009.
8.Are their any upcoming shows or tours in support of A.V.R.E.I.L ?If yes where will the band be playing and who are some bands you will share the stage with?

Oleg I.: doubt it.
Gunner: No, there won’t be any shows. But maybe in future, who knows! Time will show.

9.What does black metal mean to you?

Gunner: Its mainly self expression and freedom.

Oleg I.: music for the soul.

10.When not working on new music or band business what do you enjoy doing in your free time?

Gunner: sightseeing. This year I have visited something like seven European countries.

Oleg I.: sightseeing, reading about astronomy and new researches in science.

Oleg I.: I have my own bm project called Khôra where I record guitars and program drums at home, new album coming soon with a few interesting guests.

12.Thank you for taking the time to fill this interview out do you have any final comments for the readers?
Gunner: Stay Strong!

I had the idea to create INFERNAL BLAST in 2012 with desire to make a real agressive and violent sound and the band name must be identical to the music.

2.I  believe  Infernal  Blast  is a  one man  band  would you  like to add more members to make a  full band  or do you  prefer to  work as a one man band?

I would not add more members because i don't like share compositions and i prefer work alone (ABSOLUTE CONTROL),in this time i search live members to convert the masses. 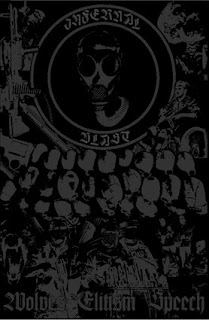 I don't work with someone for IB. In the future i will work with the singer of polish band FREEZING BLOOD for side project with him ..

4.Wolves Elitism Speech  is the bands debut EP. how  long  did it  take you  to  write the music  for the debut?

I've composed almost all the songs in 2012 and I left that aside while waiting for the right moment for release the EP. I am satisfied with this result.

5.I  believe war and  violence  are  some topics  you  wrote about on the debut  what  are  some other  topics you  write  about?

Indeed war and violence is the principal topics, i write also on post apocalyptic theme like epidemic disease or nuclear damnation.

6.Have you  started  writing new  music  for the next E.P or  would  you  like  to  release a  full-length?

.I already have another 4 tracks EP ready to recording it will be more intensive and brutal. In this time i work also on the next EP with 6 or 7 tracks.

According to me the new generation of black metal scene in France is full of uncultivated peolple who discover musics on Youtube...its so easy, they believe to be rock stars and they are more attached to their pictures than the real sense of black metal, mostly in Brest and Paris...you know who you are false guys !!!!! I want to cut their heads as during the French Revolution !!!!!! About the old scene i think that is a cult.

.I do not have any favorite french band..i prefer the Canadian and American scene with REVENGE,CONQUEROR and AMPÜTATOR.

9.Besides  bands are  their  any  honest and reliable labels or  distro's  you  could  recommend? 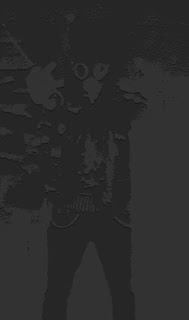 10.Besides  working  in  Infernal  Blast  do  you  currently  work in any  other bands or projects?

Yes i'm working in FORGOTTEN FEARS since 2011, it's a traditional black metal band like URGEHAL or CARPATHIAN FOREST.

Black metal for me is an obsession that devastates my mind every day since my 14 years old when i discover the PANZER DIVISION MARDUK album, it's a destruction process... 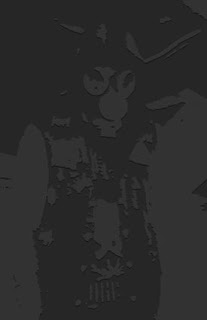 at September 29, 2017 No comments:
Email ThisBlogThis!Share to TwitterShare to FacebookShare to Pinterest
Labels: Interview with Infernal Blast done by Patrick posted on 9-29-17

Thanks for giving me the opportunity to do this update.
Hopefully people would like to tune in live for the Onslut, if not they can download it the next day. Just expect a 3 hour desecration with underground metal, featuring new releases, obscure bands, Demos/EPs & Texas bands.
If anyone needs info on anything I play, feel free to message me and I will gladly tell you.
Not sure for final words except Fuck Off And Die!
Website: http://hellpreacher.wixsite.com/mercilessonslaught
Facebook: https://www.facebook.com/MercilessOnslaughtTX/
Listen Live: http://www.mercilessonslaught.listen2myshow.com/
Mixcloud: https://www.mixcloud.com/merciless-onslaught/
Soundcloud: https://soundcloud.com/hellpreacher-johnny
Twitter: https://twitter.com/ChainsawGoat
Chatroom: https://kiwiirc.com/client/irc.rizon.net/?&theme=basic#brutalexistenceradio

at September 26, 2017 No comments:
Email ThisBlogThis!Share to TwitterShare to FacebookShare to Pinterest
Labels: Interview with Hellpreacher Johnny DJ of Merciless Onslaught done by Patrick posted on 9-26-17

Inquiries and Support for "Violent Demise Web-zine" can be directed to:

at September 24, 2017 No comments:
Email ThisBlogThis!Share to TwitterShare to FacebookShare to Pinterest

Interview  with  Azaghal  done  by  Patrick

1.Hails please introduce yourself to the  readers?When  did you  first  discover  black metal?


- My interest in more extreme form of music (after the usual thrash bands, Mercyful Fate etc.) started with Death Metal in the early 90s, especially the Swedish scene. It was the early Emperor and Darkthrone stuff that got me into black metal, along with various demo bands through tape trading.


2.Who  were  some of the  first  bands you  listened to?And  who  are some  of your current  favorite  bands?

- Originally started listening to music with stuff like WASP, Mötley Crüe and Hanoi Rocks, then evolved into thrash and stuff like Mercyful Fate and Venom.
I am pretty much stuck in the 90s/early 00s, I still mostly listen to black and death metal from that time period, but some newer killer bands I could mention are Malum, Sarkrista, Gestalte and Sawhill Sacrifice.

- We started playing together with V-khaoz around 1995, the earlier stuff was more like chaotic death metal, but quickly turned more towards black metal. Tolkien was a big thing back then, and since Gorgoroth and  Burzum got their name from there, so did we.

- Not that much has changed, I think we have established our sound pretty much already on the 3rd demo in 1999. We have never tried to reinvent the wheel, just make songs and lyrics that mean something to us personally. The  biggest influences are the already mentioned early 90s norweigian/Swedish stuff.

- Messe Des Morts in Canada was extremely cool, and of course the whole Brazilian tour. Our first gig ever, in Germany 2004 is also something unforgotable.

- We will play at a festival in Paris, France in October. Beyond that, nothing is planned for now and we are concentrating on new material

7.Moribund  Rec.  has  re-released  the bands second full length  Helvetin  Yhdeksan  Piiria release  how  did you  all  come in  contact  with Moribund Rec  for this  re-release?

- Been in contact with Moribund pretty much since the 90s. They also released 3 of our albums before. They wanted to reissue the album, and since its hard to find nowadays why not. 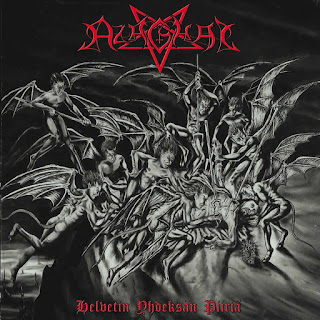 8.Are  their  any  plans  to  re-release  any  of your  other  full-lengths or  earlier  releases   through Moribund Rec  or  are you  working on  new music for the  next  full length?

- We hope to get most of the stuff re-issued, since especially in US it hasn’t been that easy to find. Also working a new album, but no release date yet, not until 2018 anyway.


9.Besides  playing  in  Azaghal  do  you  currently  work  with  any  other  bands or  projects?If  yes please  tell the readers  a  little  about  them?

- Currently only active band that I am involved in is Wyrd, “Death of the Sun” album came out on Moribund awhile back, and we are now working on the follow up.

- I think it’s among the best nowadays with some killer new bands and a lot of old bands reforming and still kicking ass.


12.Besides  bands  are  their  any  honest and reliable  labels and distro's  you  feel the readers  should  check  out soon?Do you read  many fan or web-ziness?Are their  any  Finnish  zines  you  could recommend?

- I am pretty much completely out of the loop regarding distros and zines nowadays. Northern Heritage and Werwolf Records come to mind first.


13.When  did you  first become  interested  in reading  and  studying  occult and  Satanism subjects?

- At a very young age, always been fascinated by the subjects, think it all started from Mercyful Fate and Venom lyrics and just their general image.

at September 24, 2017 No comments:
Email ThisBlogThis!Share to TwitterShare to FacebookShare to Pinterest
Labels: Interview with Azaghal done by Patrick posted on 9-24-17

The Beginning of the Brutal End!

The Chaos and Endless Torture are Forthcoming!
at September 24, 2017 No comments:
Email ThisBlogThis!Share to TwitterShare to FacebookShare to Pinterest
Newer Posts Home
Subscribe to: Posts (Atom)