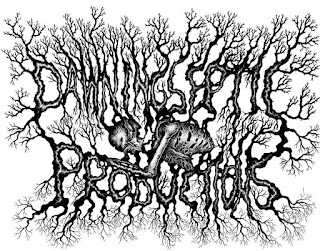 1.Hello William how are things going in Canada these days? Please introduce yourself to the readers?
- Hi Patrick, things are fine here. To whom is reading, I am William from Dawning Septic Productions from Ottawa, Canada.

2.When did you first discover metal music and who were the first bands you listened to? Who are some of the current bands you are listening to?
- This was quite some time ago in my teens and when some genres of the more extreme forms of metal were yet to be innovated. So, at that time for me it began with a combination of heavy metal bands like Judas Priest, Accept and Twisted Sister and soon after punk & crossover style bands like DRI, Discharge & Cryptic Slaughter. Well to name a few of many bands I currently listen to, I would say Concilivm, Wombbath, Sentient Horror, Outre Tombe, Satanic, Witch King, Crypts of Despair, Ossurarium, Vultur, Vhorthax, Abythic, Alastor, Tyrant Goatgaldrakona, Heresiarch, Brutality, Feral, War Possession, Cardiac Arrest, Ectoplasma, Cruciamentum...to name some of many I do like and listen to in more recent times.

3.Do you get to go to many concerts in your town or area? What have been some of the most  memorable shows you have witnessed? Who have been some of your favourite bands that you have seen live?
Yes, for sure, I don't always get to see everything but I try to get out when I can work around my life and work schedules. Some of the most memorable shows I have seen have been seeing Vomitory, Carcass, Sacrifice, Mayhem and Cruciamentum. As far as favourite bands live, this would be again with Vomitory & Carcass and also other bands like Angel Corpse, Grave, Emperor, Dark Funeral, Blood Red Throne & Morbid Angel.

4.William you started the label in 2018 when did you first get the idea to start a label? Do you run the label by yourself or do you have some friends that help out?
- Yes, the label came into existence in May 2018 and the idea for it began a few years back actually. Currently it is run by myself but that may change in the future, we'll see.

5.Are you happy with how everything has gone so far? Would you have any advice to anyone thinking of starting a label?
- For the most part yes but it has taught me some things and given me more insight surrounding it all which has been quite interesting I admit. Sure, be certain on how you wish to represent yourself and the label's theme or outlook. Don't hesitate to stick to the things you agree to or don't agree to, keep a budget and know your limits with it, communicate thoroughly and clearly and expect the same from others and don't commit to anything you can't commit to and never make any promises you are either not sure you can keep or simply can't keep.

6.Are you currently looking for new bands to work with and release or is the roster full at this time? What styles of metal do you release and work with?
- Currently, there are more things in the works and coming out this July and Summer time but after that, we will see how things go and what happens. The main interests for the label are old school death metal, blackened death metal and war metal, however we have released some death/thrash and will be releasing a band soon with some grind influences as well. Despite that, we do try to keep with the label's theme and interests.

7.What are some of your current releases that are available to the readers? And are their any releases coming out soon that the readers should watch out for?
- Recently and just released is Concilivm - The Veiled Enigma on CD, they are a blackened death metal band from Chile that are absolutely wicked! There is also Obscure Devotion – Ubi Certa Pax Est on CD, which is a reissue CD of blackened death metal from Italy that was co-released with DSP and Dark Horizon records together. We also have Deathmarch - Dismember & Bloodphemy – In Cold Blood on pro-tape who are two old school death metal bands from the Netherlands yet they both have their different sounds, concepts and unique styles of death metal too. Also, we have Satanic – From Hell & Hellborn – Pillage in the Land of God on pro-tape and both these bands are from Quebec, Canada and a great to see live! Satanic offers the listener an old school form of death/thrash and Hellborn brings out more of an old school death metal style. Coming up next for releases is Cryptivore – Unseen Divinity on digipack CD, this Australian band delivers a mixture of old school death metal & grindcore. This a reissue of this demo that has been remixed/remastered and now includes 3 additional bonus tracks. It is also a co-release with us and Vaginal Autopsy Records from Portugal and it should be out towards later July 2019!

8.Do you trade a lot with labels and distro's around the world or do you prefer to do wholesale? What styles of music do you carry in your distro?
- I have done some different trades here and there since the label began and a bit of wholesale as well. For the distro part of the label we carry all the metal genres we release plus other styles like brutal death metal, black metal, thrash, grindcore & crust.

9.Who are some labels that you have worked with and traded with? If any labels or distros are reading this where can they contact you about possible trades?
- We have worked with Dark Horizon records from the USA with a co-release on CD and are currently working with a new label called Vaginal Autopsy Records from Portugal for a co-release on an upcoming CD as well. So far, we have traded with War Productions, PRC Music, Von Frost Records & Dark Horizon Records to name some. For trades or wholesale, its best to just contact us and send a message through our facebook page.

10.William you live in the great country of Canada what is your opinion of the Canadian metal scene over the years?
- I think from the 1990’s until now, things have expanded much further than how they used to be for shows, venues and where bands would go to play on their tours. So, it has definitely grown with interest and beyond the bigger cities and with the newer generations too taking an interest in it too.

11.Who are your all-time favorite bands coming out of Canada? And are their any new bands you feel the readers should check out?
- I liked Cryptopsy, especially in their earlier times with the original lineup and am quite proud to have seen them live in theses times as well. Other bands I liked were Corpus, Nefarious, Deamon and November Grief. For newer Canadian bands, I like and recommend Altered Dead, Reversed, Entity, Atroce, Kremlin, Outre-Tombe, Hellborn, Satanic, Saccage & Oath Div. 666.

12.Besides bands are their any other honest and reliable labels and distro's you feel the readers should check out? What about good web or fanzines that you like to read?
- Yes absolutely, I can say Dark Horizon Records, War Productions, Von Frost Records & PRC Music. Outside of the label end of things and on my own personal experiences for labels and purchases, I also like Dark Descent Records, Blood Harvest, Ironbonehead, Memento Mori, Transcending Obscurity Records and Hammerheart Records. For online zines, I like and recommend Blessed Altar Zine. They cover a lot of new releases with reviews & interviews and have special editions as well.

13.When you need to take a break from working on label business what do you like to do in your free time?
- In a way the music side of things doesn’t stop, so other music related things I do is searching for and checking out new or unknown bands to hear out their material, I also write and jam out my own music that I am working on plus listening to music in general as well. Otherwise, work, reading, collecting music & some comics, to seeing live bands, I also have interests in arts, the paranormal, nature, ancient history & travel.


14.What does Underground Metal mean to you?
- Underground Metal to me, is the non mainstream and not as well-known forms of extreme metal music that relates more to a certain few and not to an accepted majority. It usually compiles of a raw form or sound and carries a certain obscurity or darkness with it.

15. Thank you William for taking the time to fill this interview out do you have any final words for the readers?
- Well first off, thank you for having me for this interview Patrick and thank you Winter Torment Webzine!
Sure for the readers, believe in yourself, believe in what you know to be real in life and not what you are either told or see in any general media gossip platform, support the bands, the labels, go to shows and keep all this going and don’t let the physical mediums of music be condemned to just digital formats either! Cheers and all the best! – William (DSP)