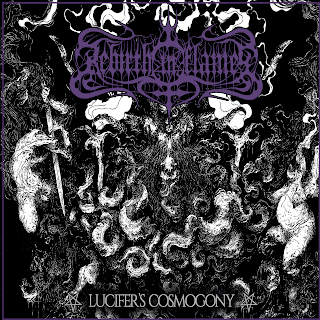 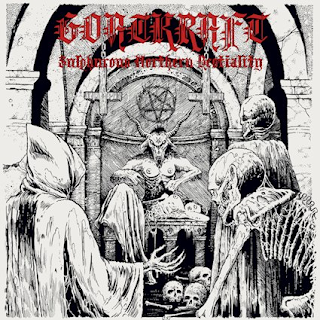 Interview with Undertaker Of The Damned posted on 2-20-19

Interview with Undertaker Of The Damned done by Patrick


1.Hails how are things going in Chile this week? Please introduce yourself to the readers?
Hello there!!! I´m Helljfscreams, vocal of Undertaker of the damned, everything is fine here.

2.When did you first discover metal music and who were some of the first bands you discovered? Who are some of your current favorite bands?
Ufff, everething started in school, listening bands like Venom, Accept, Slayer by the year 87-88, times of a repressed country by military dictatorship. Now we listen to many music, from the classic of always to bands like Praise the flame, Acrimonious, Mgla, Gravered, etc.

3.Undertaker Of The Damned was formed in 2003 what gave you the idea to start this band?
The band began in 1991, the rest were just changes of names, all started in times of school, with the young vigour to créate something cursed, there were some people bound to death metal of those years, we called them and created the band.

4.What is the current line up of the band? And how do you feel the bands music has changed over the years and releases? Who would you say are the bands biggest influences?
Line up 2019: Black sorcered – guitar, Damned count – guitar, Regicider – bass, Gverrero – drums, Helljfscreams – vocals. Without doubts today is easier to make music, the idea is that the dark side of mankind prevails, the main musical influences for us are Venom, Slayer, Vond, Unleashed, Bulldozer.

5.Satanas Potestas Est. is the bands newest release which was released in late 2018 how long did it take the band to complete the writing process for the new release?Does the whole band take part in the writing process or does one member write everything?
we didn’t reléase an álbum since 2011, we make a compilation in 2017 with a pair of new songs, in this álbum there are songs of many processes, I think we take up around a year to arrange the recordings, the main difficulty was the distance, we live more than 1000 km from the others for working reasons. The process of creation starts with guitars, then we add elements, modifications, cuts, until we get the final product, when we listen to the songs, including the lyrics, we adjust details and the we take the decision if that is the final product or not.

6.Who usually handles writing the lyrics for the music and what are some subjects written about on Satanas Potestas Est.?
That is the job of helljfscreams, he writes everything, supported for the rest of the band, we make samples until we get a good result, SATANAS PROTESTA EST is made 100% in spanish, some songs are ESCUPE LA CRUZ, LAS MARCAS DE LA MUERTE, CADA HECHIZO UN AZOTE A CRISTO, CUANDO LA LOGICA SE RETUERCE.

7.Does Undertaker Of The Damned play live very often or do you prefer working in the studio? What have been some of the bands most memorable shows over the years?
We like to play live, but doubtlessly, the sensation of record our songs is unbeatable. We recently played in Brasil, we supported Bulldozer, to play with one of your favourite bands in amazing.

8.Are their any shows or tours planned for 2019 in support of the new release? If yes where will the band be playing and who are some bands you will share the stage with?
8.- In this moment we are preparing 4 songs for a Split with our brothers of Dies Irae, we were on tour in 2017 and 2018. I think this year will be a bit quieter, even thou in South America anything could happen

9.Besides the Satanas Potestas Est. release are the bands previous releases still available for the readers to purchase? If yes what is available and besides physical releases does the band have any other merchandise currently available?
Yes, in this moments It’s available SATANAS PROTESTA EST, THE INFERNAL CHAPTER and MEMORIAS NEGRAS, which is a compilation of material we reléase in 2017.

10.Undertaker Of The Damned comes out of the legendary Chilean blackend death metal scene what is your opinion of the blackend death metal scene in Chile over the decades?
Chilean scene is so powerful now, in all Its genres, everyday appear more bands of good caliber, very profesionals, with incursions inside and out of the country, black metal keeps solid for all this time, legendary and new bands have showed that Chile is a real cáncer for the Christian world.

11.Who would you say are your all-time favorite bands coming out of Chile? Are their any new bands you feel the readers should watch out for soon?
I could write a big testament with all the bands I like, but let’s start with the origin… Venom, Vond, Possesed, Slayer, Dissection, Acrimonious, Mayhem, Wildesheer, Atomic Aggressor, Death Yell, Pentagram.

12.Besides bands are their any honest and reliable distro's and label's you could recommend to the readers?
Australis records, Rawforce, Apocalyptic records, LMDT, Hellrecords.

13.What does Underground metal mean to you?
we were born here in South America, submerged like a virus to contaminate the world, Satan is our partner, and the shit that it gets dirty with false ceremonies we have to break the ass.

14.As mentioned earlier in the interview Undertaker Of The Damned was started back in the 90's.Did you read a lot of fanzines back in the 80's and 90's? If yes what were some of your favorite fanzines to read?
Yes, a lot of them, fanzines were the only way in that time to know more about the movement and the new bands. Some of them were Brutality magazine, Grinder, Violence, Won emer magazine, Apocalipsis zine, Metal pages.

15.Tape-trading was also a big back in the 80's and 90's did you ever do a lot of tape trading? What were some of your favorite bands and demo's you traded for back in the day?
I remember that the releases of the bands abroad arrive here a year after, I mean, a LP of 1989 arrive the next year to Chile, many trades of cassettes, all the afternoon listening and recording at the same time bands like Hellwitch, Bulldozer, Venom, Rising Nation, Possessed, Unleashed, Accept, King Diamond, Slayer, Candlemass, Morgoth, Iron Angel, Nihilist, Carnivore.

16.Thank you for taking the time to fill this interview out do you have any final words for the readers?
Thank you for the the interest, stay always in the black side, spit and break the cross.

at February 20, 2019 No comments:
Email ThisBlogThis!Share to TwitterShare to FacebookShare to Pinterest
Labels: Interview with Undertaker Of The Damned posted on 2-20-19 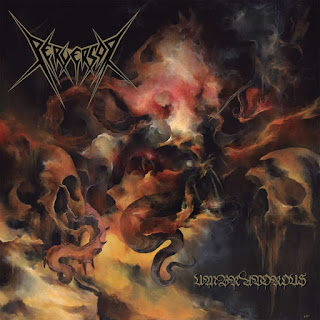 Perversor--Umbravorous  cd {Pulverised Records}
Chile's blackend death metal maniacs return with their third full length release.Umbravorous is the bands newest release featuring ten tracks of the bands trademark sound combing blackend death with a healthy dose of thrash metal influences.The guitars are played with a lot of skill and intense patterns mainly played in the fast paced range.The guitarist even adds some well written solo's and passages.The drums are played with a high level of skill and playing ability mainly done with extreme fast blasting drums.The drummer does slow to a more mid paced drum pattern throughout some of the songs.If you are a fan of Perversor's previous releases then be sure to pick up a copy of Umbravorous once it is released. 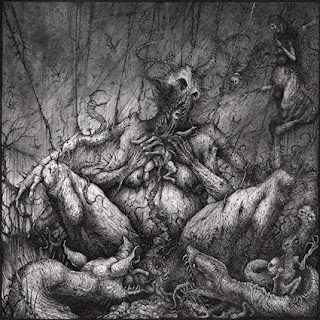 Eggs Of Gomorrh--Outpregnate Mcd {Krucyator Productions}
Coming out of Switzerland's black death war metal scene is Eggs Of Gomorrh with their second release.Outpregnate is six tracks of  vicious and barbaric blackend death metal with some elements of war metal added into the music.The guitars are played with both intense guitar patterns and extreme speed patterns.While the guitars are played at insane speeds the guitarist can write and perform some well played structures and even adds some solo's in a few songs.The drumming is done with non stop blast beats and chaotic drumming patterns that fit Eggs Of Gomorrh's style perfectly.If you are a fan of brutal blackend death war metal then be sure to pick up a copy of Outpregnate when it is  released.