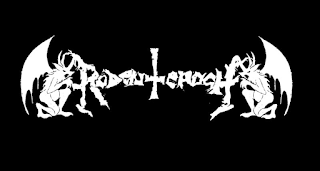 
1.Hails please introduce yourself to the readers?
I'm the vocalist/poet/partial composer. BRUTAL SALUTE.

2.When did you first start listening to metal music and who were some of the first bands you listened to?
My first experience with heavier music was when I was around 7-8 years old. The band I came across with was FAFF-BEY with their song ”Doesn't Feel Like Laughing”. I still remember feeling tangled and slightly frightened, since that was really something else. Wild and completely different from the music that I was listening at that time. It sounded ANGRY. Still does.
However, it wasn't until I was 12 years old when I actually got into metal once and for all. I had occasionaly listened some heavier stuff before that, but ever since I discovered Black Metal, it got me interested in metal music as a whole. It was a time of satanic hysteria in Finland, mostly due to certain crimes committed in Hyvinkää, '98. Basically a fucking witch-hunt, promoted by the Finnish mainstream media. So, initially I got to know this music style from the sensationalist news articles about DEVIL WORSHIP, before hearing a single note of the actual music.
Then, next year I finally got to hear the music... It was all dark, nasty, creepy and grotesque, but there was something that just made me wanna look, closer and closer... The classic car accident metaphor here.
Later on, it was all the same really; black, death, power, thrash, pagan, industrial, doom... it was all good, as long as there was distortion, maybe some double-bass drumming and strong vocals (dirty or clean). If I ever got any extra money, I would soon spend all of it to buy new records. The other thing that helped me to perceive metal music was this radio show called METALLILIITTO, which aired once in every week. Didn't have access to the internet back then, so it was very important and informational program. I still have tons of recorded Metalliliitto tapes from that era. Certain music magazines with their metal pages helped me a lot as well. All of a sudden I was hooked, and really enjoying it.

3.When did you first discover black metal and who were the first bands you listened to? Who are some of your current favorite bands?
My classmate introduced me with some black metal bands on the last night of our summer vacation before we would start the 6th grade... For him it was all just a short phase, but he managed to brainwash me with this new, dark and crazy musick while he was still at it. (Thanks man...) The bands he introduced me were quite basic, well-known ones like Dimmu Borgir, Emperor, Satyricon, Impaled Nazarene etc.
Later on I went further back in black metal history, and discovered the true pioneers like Bathory and Venom, as well as the early Norwegian bands Mayhem, Darkthrone, Burzum and Thorns. These are pretty much the ones that still keep me going when it comes to my songwriting, more or less.
Most of my black metal favourites are still pretty much the same bands as in ancient times. I really hope I'm not the only one feeling alienated by this modern, everyman's black metal culture. Too HQ for my taste. Way too accessible, theatrical and easy to handle. Where's the rawness? SICKENS ME.
I keep finding new music at every turn, but as for black metal, I'm good with the classic era/style. Of course there are lots of great bands in the underground as well. The cult is still alive. I prefer fashion-free and timeless obscurity, and you can't find that from the ”overground” anymore. I know I can't. The great source of primitive power is what I'm looking for here.

4.When did you first meet the other members of the band?And was it long before you all started Rodent Epoch?How did you all choose Rodent Epoch as the name of the band does it have a special meaning?
I joined Rodent Epoch's pre-phase FROM THE NORTH in 2005. The original vocalist left the band, so I showed up in an ”audition”, meaning we played some Darkthrone and Mayhem covers and that was it, really. I was 18 and the other guys were 15-16, so they got a good friend in me, since I was able to buy them some alcohol and cigarettes. In return, I got to meet new, likeminded people. It all clicked quite easily. Simple times... Lots of drinking, young rebellious asshole behaviour and legendary moments. Quite immediately we started to make new songs and play some live gigs, one show per year, more or less.
In 2009 when we (FTN) had to do some major line-up changes, we decided we might as well change that silly name and start a new... epoch. Originally Rodent Epoch was a song title, but when we started talking about changing our name, it made a lot of sense to use Rodent Epoch as a new band moniker. (The song title was then changed to Era Of Rats, which is found in our EOR demo.)
The original idea behind the name was heavily inspired by the black plague in Europe and both NOSFERATU films, but this is not the whole of the truth. I mean, we still live in the age of rats, surrounded by modern vampires... Everything we have done is slowly transforming, and everything has always been open for any interpretations. What do You think this name means?

5.What is the current line-up of the band?And for the readers who have never heard Rodent Epoch music how would you best describe it?Who would you say are the bands biggest influences?
The current line-up is:
Caine Corax – vocals and lyrics
Warmonger – guitar
Wuopala Scumfuck – guitar
Raato Bastardo – bass
Rattus – drums
Our previous work, Hellbastard EP was recorded with only me, Rattus and Warmonger, so we now have two new members. We go way back with both of the ”new” guys, so it was easy to include them in the new incarnation of Rodent Epoch.
We have tons of influences, but nowadays our number one inspiration is simply RODENT EPOCH.
Personally I get some rodent-drive from bands like SLAYER, DARKTHRONE, MAYHEM, AUTOPSY, BLACK SABBATH, BATHORY, THORNS, IMPALED NAZARENE, BEHERIT, TORMENTOR, MORBID ANGEL, ARCHGOAT, ENSLAVED, TERVEET KÄDET, BARATHRUM, REVEREND BIZARRE etc.

6.Rodent Lord is the bands debut full length which is being released through Saturnal Rec in October.When did you and the band first come in contact in with this label?
Basically the biggest catalyst was our first official live gig in 7 years (Tampere, around 2017). Right people happened to be around to witness our new songs, so that's probably when the whole process slowly started. Later I contacted the label boss and quite rapidly we would start working on the release. It was meant to be.


7.Does the whole band take part in the writing process or does one member usually write everything?How long does it usually take the band to complete one song?
Mostly it's been me and Warmonger making our own songs/riffs, and later we would arrange all the pieces together as a band in our rehearsal dungeon. There are a couple of riffs made by Raato and Wuopala as well, but this album is still pretty much 50/50, with Warmonger's songs and mine. In the future, I can definitely see the ”new” guys having bigger roles when it comes to songwriting though. Rattus is in charge of our DRUM RIFFS and the EVIL GROOVE. Then in the end, our noise wizard Von Haustein would capture the songs and complete the Wall of Sound. We are a collective of fucked-up minds originating from various backgrounds.
Sometimes it might take years to complete a song and sometimes only one spliff and a brief moment with an electric guitar would do the tricks. We still have some ancient songs to complete, by the way.


8.Who usually handles writing the lyrics for the music and what are some subjects written about on the debut release?
I write all the lyrics, mostly about darkness in man, nature and cosmos, written in context of madness, horror, occult, psychedelia, war, metal, blood, fire and death... Shitloads of different-sized demons keep me busy.

9.Besides the upcoming debut release does the band have any other merchandise available for the readers to purchase?If yes what is available and where can the readers buy it?
No merchandise yet. Later, or D.I.Y.

10.Does Rodent Epoch play live very often or do you prefer working in the studio?What have been some of the bands most memorable shows over the years?
We tend not to play live too often. Personally I'm not too enthusiastic about gigs and social gatherings, but I have some good memories from all of our shows, since they're always very special occasions on a personal level. I don't remember too much about the actual gigs, 'cause usually I'm in some sort of a blurry twilight zone when it all happens, but I do remember people's reactions quite well. Lots of deers in the headlights and people going absolutely apeshit.
If I have to pick one special show to cherish, that would be our first live gig as RODENT EPOCH. It was in our hometown Oulu in 2010 (NUCLEAR NIGHTCLUB) when we got to play with the legendary ARCHGOAT and BLACK CRUCIFIXION. That was pretty fucking crazy.
Studio working is something different though. It's fascinating to witness how the monster is slowly taking shape. That's when you really have to DO things and conquer yourself. Making RODENTLORD especially was a strange experience. Supernatural even...

11.Are their any upcoming shows or tours planned in support of Rodent Lord if yes where will the band be playing? And who are some bands you will be sharing the stage with?
There's nothing planned yet. I did try to arrange a show in Tampere for the night of the album release, but it didn't work out for many reasons, so I just gave up on it. You should never force these kind of things. Everything does happen exactly the right way and at the right time, you know. Don't wanna be messing with these cosmic laws anymore. Things will happen. Stay tuned, we're trying to do the same.

12.What does black metal mean to you all?
Aural equivalent to Satan himself. A shadow of humanity and nature as performed in the heavy metal context. A black sheep in the metal family tree... It would be easier to state what black metal is NOT about.
”My” black metal is obscure, raw, noisy, infamous, distant, cold and grim art with bizarre, otherwordly and fucking eerie atmospheres.

13.Rodent Epoch comes out of the legendary Finnish black metal scene what are your thought of Finland's black metal scene over the years?
I don't think there is a particular scene, but there is a solid style for sure. It's marginal music in a small country, so a lot of people happen to know each other. Despite all the abysmal crap overflowing everywhere, there are tons of great bands and albums in the Finnish Black Metal legacy, and I feel priviledged just to be born here. It's a weird fucking country in general.

15.Besides working in Rodent Epoch do you or any of the members currently work with any other bands or solo projects?
Yes we do.

16.Thank you for taking the time to fill this interview out do you have any final comments for the readers?
LONG LIVE THE LOUD

at October 08, 2018
Email ThisBlogThis!Share to TwitterShare to FacebookShare to Pinterest
Labels: Interview with Rodent Epoch done by Patrick posted on 10-8-18