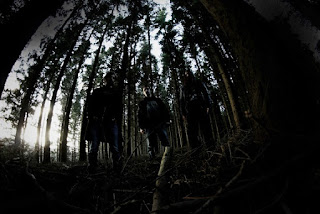 1.Hails please introduce yourself to the readers? When did you first discover  black metal?
Hi there! I'm Marco of Hornwood Fell a black metal band from Italy. I discovered Black Metal in 1994 and two years later, 1996, together my brother, we released the first demo ep of our first project "Hastur Evocation". the name of the demo was" when bestial moans composed a sweet symphony", it was a melodic black metal inpired by norway and swedeen black metal and heavy stuff of that period.

2.Who were the first bands you discovered? Who are some of your current favorite bands?
In the middle 90's i listened like Ulver, Satyricon, Enslaved, Darkthrone, Kvist and all amazing stuff released in norway in the 90's. Today i like Antaeus, some stuff of Deathspell Omega and others black metal bands from France.

3.When did you first meet the other members of the band and was it long  before you all decided to start this band?How did you all  choose  Hornwood Fell as the name of the band?
the band was formed in May 2013 by me and my brother Andrea. "Horn Wood Fell" for the meaning they express. Then, the name of the band, is become Hornwood Fell, we have attacked the first two words and the name in this way we liked more.

4.What is the  current line-up  of the band?Who would you say are the bands biggest influences and how would you  describe the bands  music?
Hornwood fell it was always a duo band. Only in the first self titled album we had a bassist player. In the firsts three album released by Avantgarde Music the influence was that of norwegian black metal of 90's, especially for Self Title album and Yheri, our second album. In the third the style is more avntgarde than the others 2 previous releases. Now we are going towards a stuff more gloomy and ferocious, like "Inferus", our last EP, inpired by gloomy, apolaptic art like for example Zdzisław Beksiński.

6.Who usually  handles  writing the lyrics  for the music what are some subjects written about on the newest release?
The lyrics are inspired to Dante’s Inferno. Sometimes with the vocals, on the songs, we wanted to create the anguish of victims convicted on the nine circle of "Dante's Inferno" only with screams and moans for give the right atmosphere.

7.I believe Inferus is a digital only release  are their any plans to do a physical release  soon?If yes when will it be available for the readers?
For the moment it is out only in digitally and in cassette in limited edition. We are looking a new label for release this one and the next works in cd and vinyl.

8.Besides  Inferus I believe the band has a few other releases  are  these still available for the readers to buy?Besides the new EP does the band have any other merchandise available if yes what is available and where can the readers buy them?
Yes, the previous releases are available on the store of Avant Garde Music and worldwide. About “Inferus” you can buy a limited edition cassette on “shareyourpainrecords.com/album/inferus


10.What does black metal  mean to you?
Today It remains the unique genre metal we like into the metal in general. For us, Black Metal, is the better way to express some our emotions, that part gloomy of us , shadow side that lives into ourselves. This genere give to us the possibility to put on music a part of us in a better way than other musical genre.


11. Hornwood Fell  comes out of the Italian black metal  scene what are your thoughts  on the Italy's black metal scene?
I don’t know well the italian scene. I liked very much the last album of “Lorn – Arrayed Claws” nad “Alien Syndrome – Outer” if we speak of Black Metal band.

12.Who are your all-time favorite Italian bands and are their any new bands you feel the readers  should check  out soon?
Asofy is areally good band of experimetal doom and other, very atmosphere and very particular.

13.Besides playing in   Hornwood Fell do you or any of the members currently play in any other bands or solo projects? If yes please tell the readers a little about them?
Yes, we have other project named “Brothermusichood” where you can find many genres like Trip Hop, electro and soundtrack and some heavy stuff very different of Hornwood Fell. With this project we are writing also a soundtrack for American tv show named Universal Cyborgs. Then another band “Nor” of atmospheric doom and soundtrack music.

14.Thank you  for  taking the time to fill  this interview out do you  have any final  comments  for the readers?
We finished the new album. News are coming very soon! Thank you for your interview!